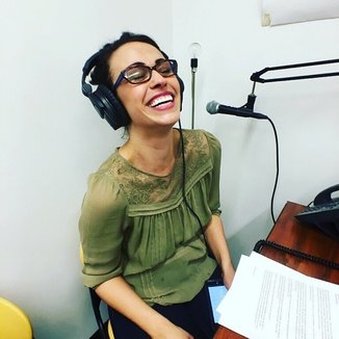 In fall, 2015, Professor Christen Madrazo introduced her creative nonfiction workshop students to several popular storytelling platforms with the following caveat: the genre was sorely missing the voices and stories of our city's vastly diverse young people. "Let's fill that gap!" she said. While she’d secretly hoped that they'd be as excited as she was to archive their truths and better represent whole bodies of people’s lived experiences, she never imagined they’d take it this far! Though the project is largely student-produced, Madrazo directs production and handles the story text editing process with each writer; helps to arrange collectively-curated story selections for episodes; and operates as the in-studio director for all story and interview raw recording sessions. In the past several semesters, she's expanded the podcast work to other nonfiction courses (including a self-designed "Travel Writing: Storytelling in Tanzania" workshop course she taught on-location) as well as in her Research Writing courses, in which her students now practice developing research inquiries based on contemporary social issues reflected in real life stories. Her work on Life Out Loud recently led, in part, to her winning the 2016 John Jay College Distinguished Teaching Award and the 2017 Service to Students Award. When not in the recording studio or in a writing workshop, Christen can be found directing John Jay’s award-winningWriting Program; curating a live travel storytelling series; or facilitating storytelling workshops around the world with DAT, an international service arts organization with whom she has designed and implemented storytelling workshops in more than 32 communities on four continents. Her own original work has been shared at the Renegade Reading Series, Projective Spaces, New World Stages, and in The Shakespeare Bulletin, a performance journal published by Johns Hopkins University Press. 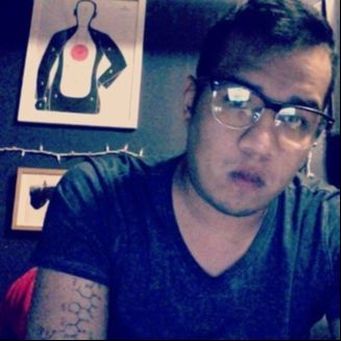 As one of the original founding members, Samuel Tapia volunteered to be the podcast's web developer, and soon realized that this would become one of his most ambitious passion projects. Sam has been at the studio since day one, and has ran the soundboard multiple times, as well as sound edited numerous stories and episodes from all seasons. His own story "WWMD", a quirky tale that takes place during a backpacking trip in Mexico with his girlfriend Lau (an honorary Life Out Loud member), can be heard on episode 1.4 "En Route." "WWMD" was also shared live at Travelogue at the New World Stages' Tony Lounge. During his last year at John Jay, Sam was part of an Independent Study that allowed him to create all the promotional content for Life Out Loud. Sam has a passion for the arts, specifically story telling, whether it's written, visual, or audio. His photograph of the "Orbs" has become Life Out Loud's most recognizable image. Sam graduated John Jay in the spring of 2016 with a degree in International Criminal Justice. He is currently working on a photography series about the children of Mexican immigrants living in New York City. Outside of Life Out Loud, Sam can be found creating the dankest of memes, and going after the longest road card in Settlers of Catan. 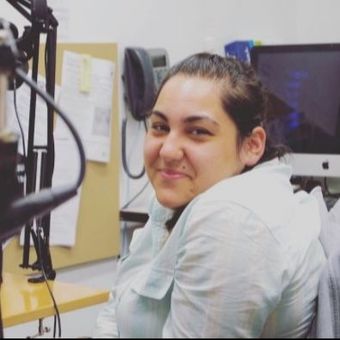 Velislava Bozhinova is one of the original founding members of Life Out Loud. In addition to running sound board, conducting sound editing, and designing underscoring, as the podcast's Digital Sound Director, one of Velislava's main jobs is to train others to edit, underscore, and run sound, too, so that the podcast has lots of helping hands working seamlessly together in order to produce a full episode; team work makes the dream work! As the Digital Sound Director for Life Out Loud, Velislava is also responsible for managing, delegating, and scheduling all of the work that happens on the raw recording tracks. She then compiles all the edited pieces; produces the full episode for review; and conducts all final sound editing on each version of the "final" product before it's launched on iTunes; sound cloud; the website; or on RADio568. Her personal passion is underscoring design, an idea that she initiated and developed here at Life Out Loud. Her own underscoring work can be heard in stories such as The Rabbit, In the Dark, and many more. When not behind the scenes, Velislava also shares her own work from time to time, such as “On the Run," featured in episode 1.2 “Our Father.” In the past year she has taken one Independent Study and one Faculty Mentored Research Group for the podcast during which time she teamed up with beautiful people to create beautiful work for Life Out Loud. When not in the studio or editing one of at least 17 of these incredible stories, Velislava--as a double major--can be found in a Political Science or Economics classroom or spending time with her three kids – a cat, a parrot, and a hermit crab. She’d like to thank her Life Out Loud family for their great work, passion and dedication. She couldn’t ask for a better team! 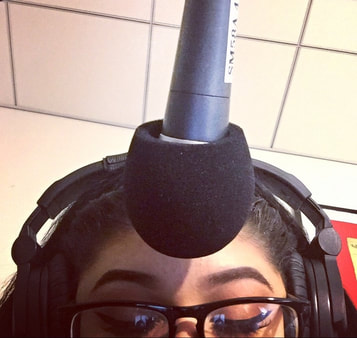 In a world of cat people and dog people, Karen Argueta considers herself more of a bird person. Lover of manatees and seasoned feeler of the feels, Karen has been hosting for Life Out Loud since the Spring of 2016 and never wants to stop. Seriously, she won't leave. This is her 4th consecutive month camping out in the studio. A testament to this is the fact that Karen has taken part in hosting every single episode for the podcast since the second episode ever. She also writes episode scripts; coordinates with the other script and interview writers, and has taken to sound editing stories and interviews despite technology's seemingly fierce determination to work against her. Karen also runs the official 'Life Out Loud' Facebook and Instagram (@lifeoutloudpodcast) pages. Born in El Salvador, Karen is an escapee from Long Island to beautiful Harlem, and she wants nothing more than to thrive and die in New York City. As a Criminology major and Gender Studies minor, getting to learn about the inner (and outer!) workings of the people that inhabit this world is the blessing she treasures the most. Her work with storytelling is an organic extension of this work. Karen also has a budding passion for teaching that she discovered while serving as Secretary of John Jay's Mock Trial Association, as well as a fire for speaking out against injustice. You can frequently find her in ice cream shops or on bridges despite her fear of heights. She hopes this speaks volumes about who she is as a human. 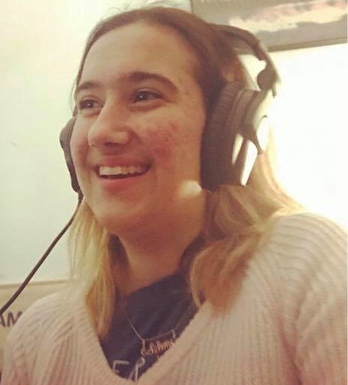 Riley Linares is a newbie to Life Out Loud. She joined at the start of the Spring 2017 Semester as Life Out Loud’s first ever first- year student. When taking English 101 with Professor Madrazo, a course which required Riley to listen to many of the beautiful Life Out Loud stories for research project inspiration, she was inspired to get involved. She now assists with sound editing, underscoring, and soundboard. You can hear her first editing and underscoring work on episode 2.8 “Found in Translation.” Riley has a true passion for telling stories and helping others share theirs. The Life Out Loud studio has become her home away from home. Attending John Jay as an out of state student from Michigan, Riley is happy to have the Life Out Loud group as her family in New York and thanks them for being so warm and welcoming and for painting a hard to remove smile across her face every week. 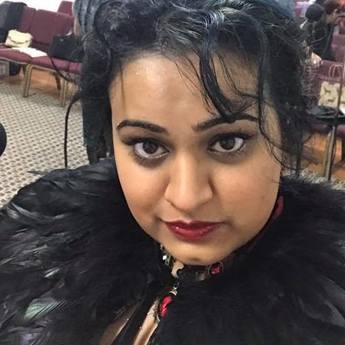 Rebecca Singh jumped into Life Out Loud in the spring of 2017 after taking a CNF writing class the semester before. The stories told in the class were unique, revealing, awe inspiriting, and, most importantly, true. While her passion, hobby, and dream job remains with fantasy writing, Rebecca found herself easily at home surrounded by CNF writing while working with Life Out Loud. She quickly learned how to sound edit and underscore pieces and hosted a few episodes. Among others, Rebecca edited and underscored “The Royal and the Peasant,” “Veritas Aequitas,” and “Stains.” She hosted a few episodes starting in the second season when she joined. Currently, Rebecca is working to help Life Out Loud’s publicity by having created and by spearheading the weekly LoL highlights campaign. Outside of Life Out Loud, Rebecca is pursuing a dual BA/MA degree in Forensic Psychology. She has plans of going to law school afterwards, but is unsure of where that will lead her. During her time away from school, Rebecca finds herself working on fiction pieces that she one day hopes to string together to create a book series, participating in Church as a singer and a rookie preacher, and trying to be her best for the best. Rebecca will forever be grateful for the opportunity given to her by the Life Out Loud family to practice new skills and to help share all these wonderful and beautiful true stories. 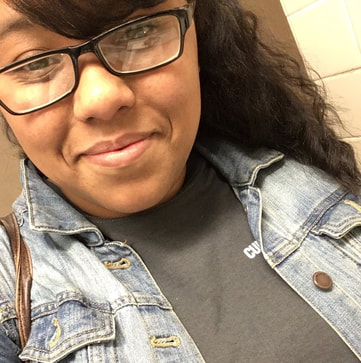 A New York City native, Brianna Harrell is a 21 year old studying Forensic Science at John Jay. Where science and art collides is where Brianna resides - in the lab performing an experiment or working with PR/Marketing in Snug Harbor. When Brianna isn't writing, procrastinating work or singing her head off, she can be found binge-watching her favorite television shows, attending concerts or snuggling up to a really great book with hot cocoa on the side. After graduating college she hopes to find herself in grad school, in a job she loves, occasionally traveling to different parts of the world or a mix of the three.
​ 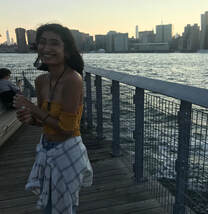 Saarah Ali was more than happy to join the Life Out Loud podcast after taking a creative nonfiction course in 2017. Once she had recorded two of her own stories, she knew that there was so much more she could learn working in the podcast. She enjoys helping out wherever she can, whether it deals with sound editing or interviews. She is currently an English major that loves writing, painting, and hanging out with her cats in her spare time. 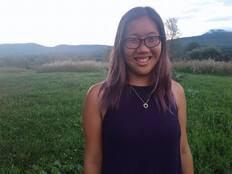 Sadie is a junior at JohnJay college majoring in English. She started out as a forensic psychology major but Professor Madrazo’s English 101 class inspired her to switch to English. Sadie is originally from China but grew up in New York City. In her spare time, you can find Sadie rushing a Broadway show for cheap tickets or at Lincoln Center seeing the ballet on a student discount. Sadie is a voracious reader who always has her nose buried in a book. She is an aspiring writer who writes best under pressure right before a deadline.
​ 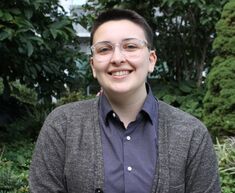 My name is Gina Capone and I am a senior in the Honors Program. Currently, I am a Presidential Intern in the office of Karol V. Mason in addition to serving as an Honors Peer Mentor. I also am a fellow in the Siegel Fellowship for Nonprofit & Strategic Communication and in the Ron Moelis Social Innovation fellowship. I'm interested in pursuing the field of Higher Education and working with LGBTQ students in their development upon graduating this spring. During my free time, I love traveling and practicing film photography.

Deja is a junior majoring in English and minoring in Film Studies. She switched her major from Forensic Psychology when she realized her love and passion for storytelling. Though she helps out in many capacities for Life Out Loud, you're mostly likely to find her behind the sound board. She wants to someday become a director or screenwriter and also hopes to collaborate with some of her favorite artists to create music videos. When she’s isn’t studying, she’s listening to some of her favorite artists: Travis Scott, Billie Eilish, James Blake, Nicki Minaj, and H.E.R. She loves making YouTube videos, playing video games, hanging out with her family, and changing her hair color every week.